Placement of the Penile Pump Reservoir


Placement of the Penile Pump Reservoir

The reservoir is to be placed in the space of Retzius or in a pre-peritoneal space, next to or above the bladder. To avoid perforating the bladder, the Foley catheter is uncapped and the urine drained. Using a blunt curved Mayo scissors, a small defect is made in the floor of the inguinal canal between the base of the penis and the medial aspect of the inguinal cord. Blunt use of the finger to perform this maneuver will create a very large defect in the floor of the canal thus predisposing for reservoir herniation. The hole in the floor of the canal is best made by tilting the scissors at a 90-degree angle with the plane of the abdominal wall and by positioning the tip of the scissors just over the pubic ramus. A common mistake here is not going deep enough with the scissors for fear of bladder puncture. Incomplete perforation of the floor of the inguinal canal prior to substituting the scissors with the operator’s index finger will result in separation of the transversal fascia from the undersurface of the internal oblique muscle, rather than dilation of the space of Retzius. This also causes loss of counter-traction of the transversal fascia, making puncture of the fascia and access to the space of Retzius very difficult. Finally, the positioning of the reservoir above the transversal fascia leads to auto-inflation, palpable reservoir and also predisposes to reservoir herniation. 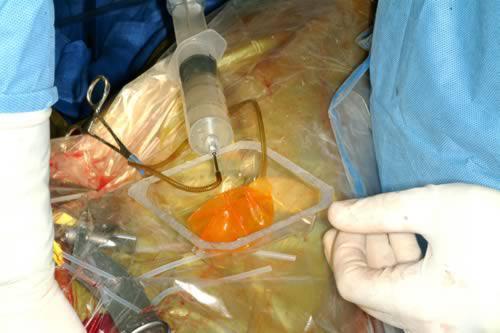 The excursion of the Mayo scissors ounce the fascia must be limited to a few millimeters and once the space of Retzius is entered, the tip of the scissors is replaced a closed, long nasal speculum. The operator’s finger is used to help in this dilation and confirm the location of the reservoir. Again, there is no need to over dilate this space, and care must be taken not to split the floor of the inguinal canal during dilation of the space of Retzius as this may cause reservoir herniation. The empty reservoir is then placed through the blades of the open nasal speculum.