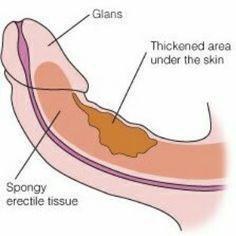 PD is thought to be a wound healing disorder of the thick outer layer of the penile shaft called the tunica albuginea that presumably occurs after an injury to the penis.  This abnormal wound healing results in the formation of inelastic or fixed scar tissue or plaque.  The plaque causes a deformity of the penis including curvature, indentation also referred to as an hourglass deformity, hinge effect during erection, shortening of erection and can be also be accompanied with erectile dysfunction. Once the scar or plaque is formed it does not change to become normal penile tissue and therefore the plaque and deformity become permanent. The exact mechanism behind the development of this abnormal wound healing remains unknown.

PD is not rare and occurs in 3 to 20% of the population and in certain populations such as men with diabetes and erectile dysfunction (ED) it can be even higher. Because of the inability to obtain a firm erection, PD is often concealed in men with ED and they are unaware that they have it.

PD very rarely resolves on its own, and it is likely that within the first 12 to 18 months after presentation, up to 50% of men with PD will experience worsening of the deformity.

PD can occur in men of all ages, as early as in 30-year-old men, however there is an exponential increase of its prevalence at age 50 and higher. Medical conditions such as hypertension, hypercholesterolemia, diabetes and low testosterone are associated with an increased prevalence of PD.  Up to 33% of men diagnosed with PD have diabetes. Also men undergoing open or robotic radical prostatectomy have a higher risk (16%) of developing PD. Low testosterone levels has been suggested to exaggerate the severity of PD and in one study testosterone supplementation seemed to improve the efficacy of the treatment of PD. PD is also associated with collagen disorders such as Dupuytren and Ledderhose disease, systemic fibrosis (scleroderma) and Lupus.

PD can also be psychologically devastating. Men with PD have diminished self-esteem, shame, embarrassment, loss of sexual confidence and depression. This can affect their relationship at home, at work and in the bedroom. Penile shortening and deformity and the inability to perform intercourse are the most common risk factors for developing emotional distress.

Deformity of the penis is the most frequent finding associated with Peyronie's disease. Often, it is very subtle and only noticed when an erection is provoked. Deformities range from a narrowing of the shaft like an hourglass to a 90-degree bend of the erect penis. In addition, narrowing of the penis may be present proximally towards the base or distally towards the glans. Some men experience decreased erections distal to the area of scarring, and there is a tendency for the penis to buckle under pressure during intercourse.

Use of vacuum constriction devices, penile injection, urologic instrumentation, and mountain biking may cause direct trauma to the penis and can lead to Peyronie's disease. Symptoms may also begin after an injury to the penis during sexual intercourse (penile fracture).

A rare form of Peyronie's Disease is also associated with DePuytren's contracture of the hand. Risk factors include Paget's disease of the bone, and rheumatoid arthritis. In some cases, men who are related by blood tend to develop Peyronie's disease, which suggests that familial factors might make a man vulnerable to the disease.

For year’s urologist have speculated on the potential causes of Peyronie’s disease including infection, inflammation, and immune system disorders. None of these theories are plausible however. For men without any systemic vascular risk factors, vigorous sexual activity causing trauma to the erect penis is the most likely cause the formation of scar tissue.

Typically, an episode of Peyronie's disease is self-limiting, with the symptoms of pain resolving within 12-18 months. An acute or active phase during the first six months usually ends spontaneously. This phase involves pain of the flaccid penis, and pain with erection or intercourse. Curvature may be moderate, and the plaque or scar tissue may diminish or soften. After about eighteen months, no further deformity or scarring of the penis occurs, and usually the pain disappears. A plaque or hardening of the penis in a specific area may be noticed and is permanent. At this point, no further improvement of the condition will occur. This natural history of Peyronie's disease results in a stable, non-progressive deformity, which may or may not need further treatment.

For patients following radical prostatectomy, a plaque or scar tissue is usually first noticed at 10 to 12 months following the operation. In addition shrinkage of the flaccid and stretched penis may continue to occur over the next 6 to 12 months after noticing the plaque. These changes are permanent.

Peyronie's disease is an uncommon condition, which is, in most cases, related to vascular disease or penile trauma. Symptoms, including penile curvature, shortening, and pain, should initially be treated conservatively with the expectation for improvement or resolution. The best option for men with erectile dysfunction or inadequate erections, and penile deformity due to Peyronie's disease, is placement of an Internal Penile Pump.

Historically, medical experts have recommended waiting at least a year before attempting to correct Peyronie's disease surgically, as the plaque of the disease may shrink of disappear without treatment. Some researchers have given vitamin E to men with Peyronie's disease, usually orally in small-scale studies with some reported improvement.

However, no controlled studies have established the effectiveness of vitamin E therapy. Similar inconclusive success has been attributed to the oral application of para-aminobenzoate (PABA), a substance belonging to the family of B-complex molecules.

Researchers have also injected chemical agents such as collagenase, dimethyl sulfoxide, steroids, and calcium channel blockers directly into the plaque. None of these have produced convincing results. Steroids, such as cortisone, have produced unwanted side effects such as atrophy of healthy tissues. Most recently, collagenase, Verapamyl, and interferon injections have also proven to be unsuccessful.

Radiation therapy, in which high energy X-rays are aimed directly at the plaque, has also been used. Like some of the chemical treatments, radiation appears to reduce pain, yet it has no effect on the plaque itself and can cause some unwelcome side effects.

None of the treatments mentioned so far has equalled the body's natural ability to deal with Peyronie's disease. Therefore, the only medical treatment that I recommend for this condition includes anti-inflammatory drugs (Viox, Celebrex, Indocin, Motrim) to reduce pain or Cialis, Levitra or Viagra to improve erectile function if either symptoms are present.

Surgical intervention prior to eighteen months after the onset of the disease is not recommended, since progression and/or resolution may subsequently alter the results of the procedure. If the natural history of Peyronie's plaque has produced significant decrease in erectile function, surgery is required.

Peyronie's disease has been treated with some success by reconstructive surgery. The removal or pinching of tissue from the side of the penis opposite the plaque, which can cancel out the curvature, is known as the Nesbit procedure. This is the most successful reconstructive procedure for men who maintain excellent penile rigidity, do not suffer from erectile dysfunction, and are unable to have intercourse due to anatomical deformity. The procedure is not recommended for cosmetic purposes alone. This method also causes shortening of the erect penis.

The surgical methods that remove or expand the plaque, followed by placement of a patch of skin or artificial material, should in my opinion be avoided. This method may cause loss of erectile function, further penile shortening and a loss of penile sensation. Plaque excision and grafting causes a significant reduction in erectile rigidity in the majority of men and urologist who use this technique must inform patients of this risk as well as be prepared to diagnose, evaluate and treat the post-surgical erectile dysfunction. In addition patient must be warned that irreversible shortening of the penis will occur resulting in a smaller penis than that patient would have had if initially treated with a penile prosthesis.

The best option for men who suffer from Peyronie's disease and erectile dysfunction is to receive an implanted device known as the Internal Penile Pump. This device increases the rigidity of the erect penis as well as improves the curvature without shortening of length. In very rare instances, Internal Penile Pump placement combined with a technique of incisions and grafting (or plication, which is pinching or folding the skin) is indicated if the penile pump alone does not straighten the penis.

Dr. Eid shows a patient that has had his Peyronie's disease corrected with a penile implant.

The penile implant overtime will by itself correct the penile curvature which was caused by the Peyronie's disease. 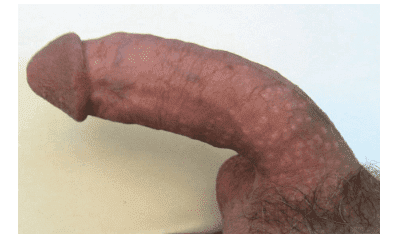 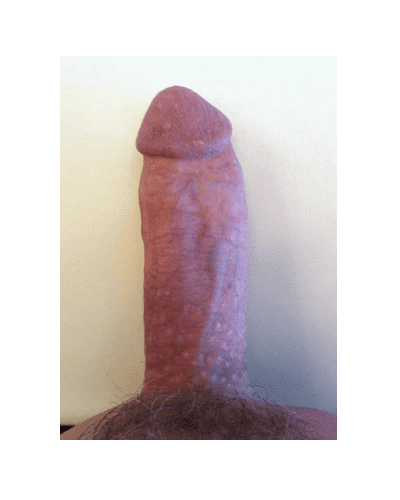 Above photos are of patient with Peyronie's disease (left) and 6 months after Penile Implant (right).

This video describes the effectiveness of penile implants to correct severe curvature caused by Peyronie's disease without losing penile length. Even though the patient was potent, his curvature was so severe that his best option was the use of a penile implant because otherwise he would have lost a significant amount of length. So much so that intercourse would no longer be possible. Indeed the most common complaint following correction of angulation caused by Peyronie's Disease is inadequate penile size.

Question: I have Peyronie’s disease surgery in Cleveland the doctor didn’t remove all the plaque, shouldn’t he had? Should I have all of the plaque removed before I go with prosthesis?

Answer: In the setting of Peyronie’s disease and ED it is always preferable to simply place a penile implant. Any procedure that removes plaque and places graft over the defect or “plicates” the penis will cause penile shortening and put the patient at greater risk of infection, with devastating consequences. Once the implant inserted, the plaque will no longer be palpable and therefore it is not necessary to remove it.

Question: My degree of Peyronie’s disease bend is app 30 degrees to the left. My penis length was 6 inches before the onset 20 years ago. How can the penile pump help correct this and how much of a decrease in bend could I expect? In your opinion, how much of my bend could the pump correct?

Answer: For some patients, the curvature is corrected 100% others are corrected enough to permit sexual activity without difficulty. Patients with Peyronie's disease in general are best managed conservatively, especially if they are able to have intercourse.  If intercourse is not possible (regardless of the rigidity of the erection) a penile prosthesis is the best option for most. It is better to have a longer penis, which is slightly crooked than a very short straight penis. Penile shortening always occurs with correction on angulation (either with plication, Nesbit procedure or plaque excision) without placement of a penile implant.