Updates have been made to the Inflatable Penile Prosthesis (IPP) pumps offered by both American Medical Systems (AMS) and Coloplast (formerly Mentor), as well as to the CX and LGX cylinders offered by AMS. Also, AMS has added an antibiotic coating to its Artificial Urinary Sphincter (AUS).

Penile implant technologies have continually improved since their introduction. The following is a history of advancements and innovations in penile prosthesis technology. 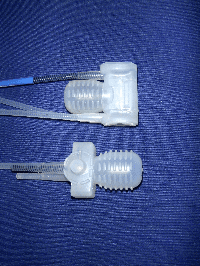 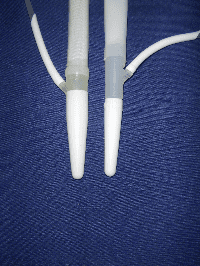 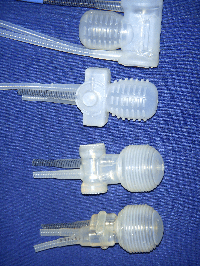 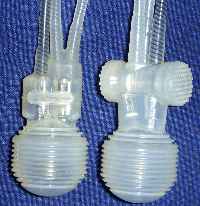 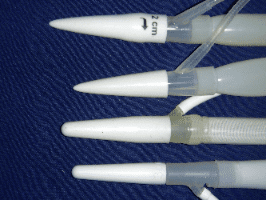 The Titan 0-Degree, soft tip cylinders have the same Bioflex® features as the current cylinders, but has two new features: 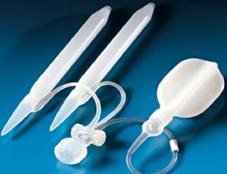 Coloplast will conduct a market acceptance test (MAT) project to evaluate this product prior to widespread commercialization.

Approval of  the “One-Touch Release” pump

One-Touch Release Coloplast (previously Mentor) receives approval for the “One-Touch Release” pump that also allowed the patient to squeeze one time only and release to obtain deflation. This is an important development for the Titan model because the deflation was always difficult for patients implanted with the previous model.

Coloplast Titan® One-Touch Release (OTR) recently became available in the U.S. Initial Titan OTR implants have been conducted in the U.S., Europe and Canada, with encouraging results. The OTR features a true, one-touch deflation system - easy for patients to locate and operable with one hand. The well-defined deflation system, or "Touch Pads" are designed to create a discernible landmark for the patient to quickly and confidently access. The new deflation system helps promote quick, confident training for both the patient & healthcare practitioner, as well as ongoing ease-of-use for the patient and partner. 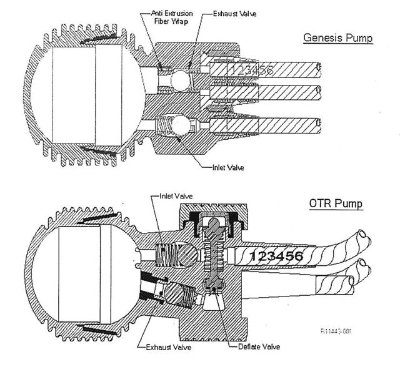 In addition, the penile pump offers a non-bulky, low-profile size; enhanced silicone for higher threshold "tear strength" (likely to result in increased product durability, an issue with previous versions); and an overall simplicity likely to decrease repeat office visits, phone calls, and repeat training time. From a hospital standpoint, intraoperative prep of the device provides for easier priming of the penile implant system (the removal of excess air prior to filling) and may reduce slightly the overall intraoperative time.

"This remains a great device for the patient with a larger penis," says Dr. Eid, "as these are the only cylinders that will expand to 22mm girth." In addition, only Titan cylinders are available in lengths of 24cm, 26cm and 28cm.

Although the penile pump is easily identified and operated by patients, the small size of the deflation valve sometimes requires a longer learning curve.

In a recent study "Evaluation of Three Penile Prosthesis Pump Designs in a Blinded Survey of Practitioners," Urologic Nursing, 2008, 32 medical professionals, all familiar in teaching the operation of penile implants to patients, reviewed currently available penile pumps. The blindfolded reviewers, examining the pumps under time constraints through mock scrotal sacs, were asked to rate device: 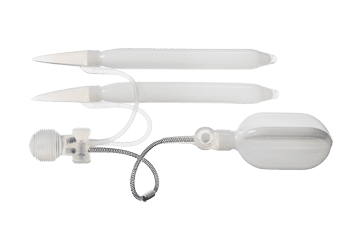 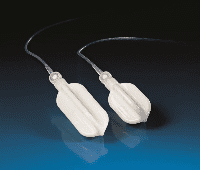 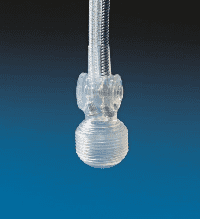 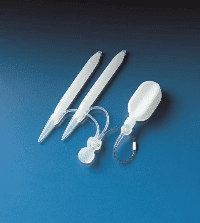 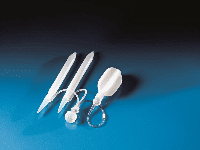 Called the AMS 700MS for “Momentary Squeeze,” it is designed for easier deflation. These features allowed the patient to first press the button, and then squeeze the cylinders to obtain full deflation. Holding the deflation valve while squeezing the cylinders simultaneously was no longer necessary. In addition, the pump has a smaller body, which increased patient comfort, and a lockout valve to resist auto inflation. Finally, palpable ridges were added to the pump to permit easier inflation. 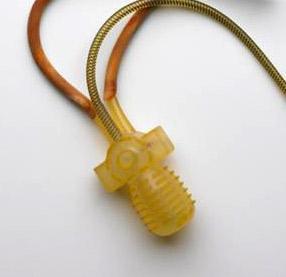 Dr. Eid has implanted AMS's Momentary Squeeze (MS) Pump with great success in patients suited to the CX-cylinder and LGX-cylinder versions. (The LGX model offers the potential for increased penile length in patients complaining of penile shortening after radical prostatectomy.) Both cylinders now feature redesigned proximal ends. At only 9.5mm in diameter, the ends allow for significantly easier insertion for patients with fibrotic proximal corporal bodies.

The MS Pump's advantages include a smaller profile (which enables a more discreet placement) and one-touch deflation. However, this quality can result in operational difficulties with inflation (more difficult to get a hold of within the scrotum) and deflation (small button can initially be difficult to find). In addition, its new lockout valve has the advantage of preventing auto-inflation (potentially embarrassing and/or painful), but can at times make it difficult to initiate inflation. For these reasons, Dr. Eid recommends this penile pump for the younger patient with an average-sized penis.

AMS introduces the Tactile pump for the 700 series implant 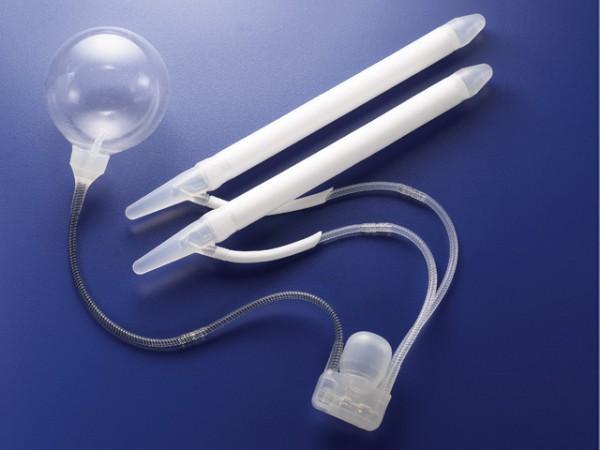 In addition to its ability to transfer a slightly larger volume of fluid with each squeeze, the penile pump came with a modified exterior surface for easier inflation. The deflation part of the pump was also increased in size, and sharper edges were added to permit easier localization of the deflation valve and permit better deflation.

"The AMS 700 CX Series with the Tactile Pump remains my prosthesis of choice for the older patient where pump concealment is not an issue," says Dr. Eid. "This pump is large, easily palpable, remains the softest to inflate and has a very large deflation footprint, which is quickly recognized by the patient." The Tactile pump is not available with the LGX cylinders. 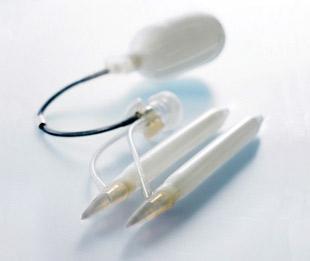 This coating is covalently bonded and designed for long-term attachment to the device. This hydrophilic coating is designed to help inhibit bacterial adherence. This technology, when used to coat central venous catheter and hydrocephalus shunts, was effective against staphylococcus (3,4). Animal studies demonstrated sustained inhibition against Staph epidermidis up to three days following implantation (5). This hydrophilic surface allows physicians to maintain their current antibiotic device preparation. When soaked in an antibiotic solution prior to implantation, antibiotic which will coat the device will then be eluted over a time period. In addition, the surface of the cylinders becomes lubricious, which makes it easier to implant the device.

(This more anatomical distal tip was introduced with the narrow-base cylinders in May of 1996).

The anatomically shaped distal tip is designed to provide a better fit and a natural aesthetic result. In addition, the smooth, soft distal tip of the Alpha I is seamlessly integrated into the cylinder bladder. The narrow-base cylinders prosthesis (introduced in May 1996) was the only pre-connected narrow inflatable device available. Penile implant base diameter is 3.7mm narrower (with rear tip extenders) than the regular Alpha I implant. The cylinder bladder diameter has also been reduced by 2mm, resulting in an ideal design for fibrotic corpora, re-operations and narrow anatomy. In addition, the cylinder base/tubing angle is reduced from 45 degrees to 22.5 degrees, which allows for easier placement into the proximal corpora. The dilation required for placement of this device is only to 10mm. This allows for easier surgeries and decreases the risk of perforation of the tunica albuginea (outer layer of the penile erectile chamber). Also, the narrow-base cylinder design results in less pronounced folds while in the flaccid state. Finally, the narrow-base cylinder expands to 18mm girth when inflated (same as regular AMS 700 series). 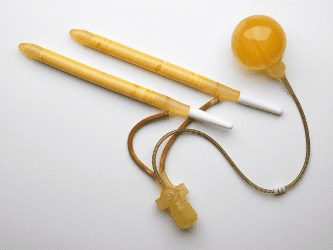 InhibiZone is a formulation of Minocycline Hydrochloride and Rifampin, which is impregnated onto the outer surfaces of the device resulting in a marbled yellow-orange trace or modelled effect. Depending on the size of the penile prosthesis selected, devices are manufactured with a quantifiable amount of minocycline and rifampin. Antibiotics impregnated into the device surface elute from the silicone matrix when exposed to a warm, moist environment, resulting in a localized antibiotic regimen. Concentrations represent less than a common oral or IV dose. The cylinders, reservoir, pump and tubing are all completely treated with the drug eluting technology.

Minocycline and rifampin have been safely used as a surface treatment in indwelling venous and urinary catheters. The scientific platform was transferred to the IPP technology to focus on a proven method to provide broad-spectrum inhibitory activity against gram-positive, gram-negative bacteria (1). Literature shows the combination of minocycline and rifampin to act synergistically to prevent colonization of bacteria and be particularly effective against staphylococcus, the most common cause of IPP infection (2).

The majority of the InhibiZone antibiotic surface treatment elutes from the Inflatable Penile Pump within the initial 2-3 days post-implant, with the remainder of the drug eluting over the next 2-3 weeks. Thus, the effects of InhibiZone primarily reduce early infections. Expectations of a rifampin and minocycline combination should show a reduction in staphylococcal-based infections, the most common cause (about 70%) of IPP infections. Parylene micro coating to increase cylinder durability is also incorporated into the InhibiZone cylinders.

Parylene Micro Coating is introduced as a feature to enhance the American Medical Systems 700 Series cylinder durability and subsequent longevity. Parylene coating is applied via a vapor deposition process to non-tissue-contacting surfaces. It increases lubricity to the silicone surface, hence reducing friction and wear. The new Parylene coating, a micro-thin (60 millionths of an inch) layer, has been demonstrated in bench testing to add millions of fold and tube wear stress cycles before detectable wear is noted on the silicone surface. 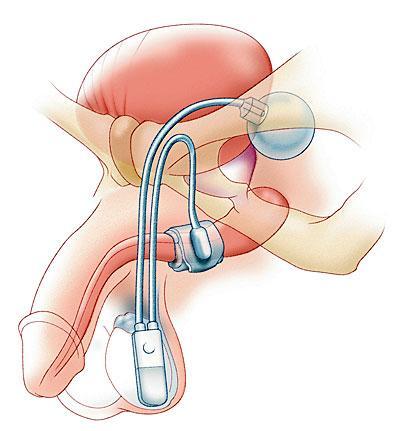 AMS has improved the AUS by coating the device surface with inhibizone. This is the same antibiotic coating (Rifampin and Minocin) currently available on the internal penile pump that has dramatically reduced infection rates since its introduction in 2001. In combination with Dr. Eid's self-developed No-Touch Surgical Technique, which eliminates direct and indirect contact between the prosthesis and the patient's skin (the origin of most infections), he believes the new coating will offer additional protection against the most common pathogens responsible for sphincter infections.

The Mentor Lock-out™ valve reservoir is introduced to the market