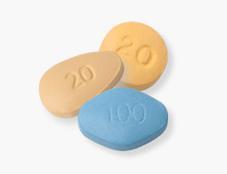 How do these drugs work?

Cialis, Levitra (Vardenafil) and Viagra™ (Sildenafil) work by selectively inhibiting an enzyme in the penis called Phosphodiesterase V (PDE V), a chemical that takes away the erection. By blocking PDE V temporarily, these medications empower the chemical, Nitric Oxide (NO) that occurs naturally with arousal to initiate, produce and maintain an erection. Patients need sexual stimulation and foreplay to release NO initiate an erection in order for these medications to be effective. They are called phosphodiesterase inhibitors.

This class of medication is a safe and effective oral treatment for men with erectile dysfunction of physical, psychological or mixed cause. However, it is important that patients should be aware of the low probability (less than 50%) that intercourse will be possible after the first dose - particularly in severe or advanced cases and especially when using Viagra or Levitra. The majority of men who stop Viagra because of apparent lack of effect will in fact respond and achieve intercourse if they continue to try again, progress from 50 mg to 100 mg, or take the pill without food on an empty stomach (3 hours after eating). Taking Viagra or Levitra on a full stomach will not only reduce their peak concentration in the body by 30 to 50% but in addition will delay their peak concentration by one hour. In other words one may have to wait after intake before initiating sexual activity. Cialis peak concentration and time before reaching maximum absorption is not affected by a full stomach. Because of this it remains my drug of choice for the treatment of ED and I always prescribe it first. In addition many of my patients experience fewer side effects with Cialis then with the other two. Finally Cialis has a long period of activity and patients are successful at intercourse up to 36 hours after taking this pill. This represents a distinct advantage from the patient’s perspective as it diminishes the need for planning. Sex can be more spontaneous and natural. Planning kills the mood. Having sex long after taking the pill makes men feel more normal! For these reasons I will first try Cialis on all my Patients and reserve Viagra and Levitra for those men who do not tolerate Cialis. 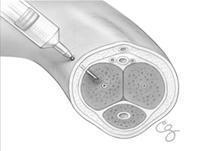 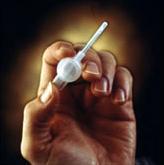 The medication alprostadil is absorbed through the urethra (the tube in the penis through which urine and semen flow) and distributed into surrounding tissues. Unfortunately, only a very small percentage of the total dose actually penetrates the penis, and most of the medication is absorbed into the bloodstream, lessening the direct effect on the penis. The fact that the medication is not placed where it is supposed to act, as opposed to penile injection therapy, explains its lack of efficacy.

The urethral medication (alprostadil) comes in a plastic applicator, is prefilled and ready to use. The physician determines the proper dose. One must insert the prefilled applicator 1.25" into the opening of the penis. A pellet of alprostadil is then pushed out of the applicator into the canal where urine travels.

Since the approval of Viagra, urethral medication use has dropped in popularity. A recent study published in Urology (January 2000) showed that penile injection therapy was more efficacious, better tolerated, and preferred over intra-urethral medication.

VEDs are a useful noninvasive treatment for ED. They involve a cylindrical device that is placed over the penis. Many types of VEDs are now available, and it is recommended that only those available by prescription should be used.¹ ² A VED, which mechanically creates penile blood engorgement, consists of a vacuum chamber or cylinder, a pump to produce negative pressure, and constriction rings.³

VEDs can be used to treat organic or psychogenic ED. Current reviews report successful results in men with a variety of organic etiologies, including spinal cord injuries, postprostatectomy, diabetes, and arterial insufficiency.³

After the penis and constriction rings are coated with water-soluble lubricant and the rings are loaded onto the cylinder base, the cylinder is placed over the penis with the base held firmly against the pubis to maintain a seal. The pump is then activated to slowly create negative pressure, or a vacuum, inside the cylinder, which draws blood into the corpora cavernosa, producing an erection.¹ ³

Once the penis is engorged, the constriction band is pulled from the cylinder onto the base of the penis. The negative pressure is released through a valve, and the cylinder is removed. It takes an average of 2 to 2½ minutes to create an erection through this procedure, according to recent reviews.³

The erectile state produced by VEDs differs from a normal erection: penile skin temperature is lower, the veins of the penis appear distended, and penile circumference is increased. In addition, the penis may pivot at the base, requiring the patient to stabilize the penis during intercourse.¹