Erectile dysfunction, or male impotence, is defined as the persistent inability to maintain or to achieve an erection of sufficient rigidity to have satisfying sex. It is one of the most commonly untreated medical disorders in the world. Approximately 30 million men in the U.S. have problems achieving or maintaining an erection, and the frequency of ED increases with age. 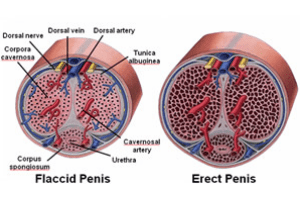 Only one in twenty of these men seek treatment. Men are often embarrassed about being impotent, and prefer to avoid sex rather than seek help. This is unfortunate, because consistent loss of erection is not normal at any age. In addition, loss of erection can be a symptom of a serious medical illness, such as coronary disease or advanced vascular disease. Finally, there are many effective treatments available for this difficult condition.

The 2 structural compartments of the penis, the paired corpora cavernosa and the corpus spongiosum, are interspersed with a complex network of endothelial cell–lined lacunae, helicine arteries, and nerve terminals. The organ is innervated by somatic and autonomic nerve fibers.

What happens to a couple with erectile dysfunction?

Men, who suffer from ED due to a physical problem, often have a significant psychological reaction to the ED, such as depression, performance anxiety, or loss of self-esteem. This is a normal reaction and should not be confused with psychological impotence. Men with ED just do not feel “normal.” As one patient once put it, "I do not feel like myself."

This in turn has a profound effect on the physical and emotional relationship of a man and his partner. The partner may no longer feel attractive, will be hesitant about initiating sex or may even think that he has a mistress. He knowing that the penis does not respond to physical stimulation may stop touching or caressing her for fear of arousing her. Some men even become chronically angry or depressed, sometimes even tearful such that the partner no longer finds him sexually attractive.

An occasional loss of erection is nothing to worry about. But if it happens consistently, you should see a physician specialist in this area, either an internist specializing in erectile dysfunction, or an urologist. Only an urologist can treat all forms of ED severity, but the good news is; all forms of ED are treatable.

Various treatment options are available for men with Erectile Dysfunction and a proper evaluation should be done before prior to starting any therapy.

Typically, the first goal in treating ED is to get your blood sugar level or blood pressure under control. If you smoke cigarettes, it is strongly recommended that you stop, as tobacco causes blood vessels to narrow.

Next, I would recommend oral Drugs - you may also be prescribed one of the three oral PDE5 Inhibitors - Cialis, Levitra or Viagra.

Medication therapy is extremely effective in augmenting the quality of man’s erection such that he is able to have satisfactory intercourse. Indeed medications referred to as phospho-diesterase inhibitors such as Cialis, Viagra, Levitra and Stendra work in 65% of men suffering from erectile dysfunction. Cialis is currently the preferred drug since it is the only one that may be taking on a full stomach and lasts for 36 hours. This favors a more romantic and natural sexual interaction. Planning kills the mood!

However, studies have shown that fewer then 50% of men with ED and Diabetes respond to oral medicines. Also,fewer than 35% of men with ED after prostate cancer surgery respond to oral medicines. For these men the Internal Penile Implant is currently the best option. The Penile Implant is an approved medical option that has been used for over 30 years. During the course of a 45-minute outpatient procedure, the pump is inserted through a small one-inch opening in the scrotal sac. By squeezing the pump, fluid is pumped, resulting in a long lasting erection. Once inserted, there is no maintenance required for the pump and can remain in place for a lifetime.

Other treatment options such as penile self-injection therapy, external vacuum pumps and the medicated urethral system for erection are in rare occasions an effective long-term treatment. Only a very small percentage of men will continue with these treatments as evidenced by a very high drop out rate and a very low refill rate. These treatments require extensive planning which interferes with spontaneity. This may be the reason why the refill rate is so low and the drop out of treatment so high.

Men who do not respond or tolerate oral medications are best treated with an internal penile pump (IPP) commonly known as an inflatable implant. The Internal Penile Pump is an inflatable, water-filled device. During the course of a 45-minute outpatient procedure, the pump is inserted through a one-inch opening in the scrotal sac. By squeezing the pump, (which is contained completely within the scrotum), for approximately a minute, fluid is pumped into the penis, resulting in a long lasting erection. To return the penis to its flaccid state, simply press and hold down the pump. Once inserted, there is no maintenance required for the pump, which can remain in place for a lifetime. Couples are once again able to have spontaneous sex. Normal sensation including orgasm and ejaculation are not affected.

As one patient described it: "The control and quality that you want, the pleasure your partner will appreciate! I feel like myself again!" 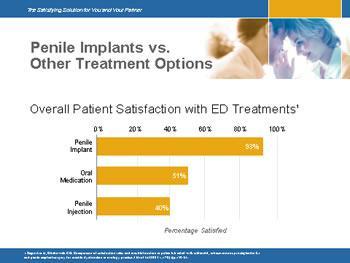